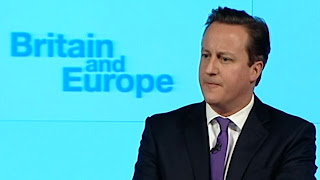 The news this morning, and the ripples throughout the day in Europe, were the unsurprising, postponed and expected speech of the UK Prime Minister David Cameron on "his" country "approach" to the European Union. A lot of argumentation and speculation thrived about this subject in the past few days regarding the role of the United Kingdom in Europe and how this role is perceived by the "Continentals". Mr. Cameron's speech did not make him any favours to change or get any sympathy from them. The main message I got from all the comments about this speech, is that David Cameron wants some leverage, a bit of bartering on the future of his European view (and his voters), a view that is diverging more and more from the project the Continentals want to build.

For this he used nationalist language and feelings. Also some snobbery, superiority and other epithets of what makes British people so good and different and, because of that, so undeserving of the fate and doom Continentals are drifting into, if persisting on the reforms they want to implement.

But... what is really reeling David Cameron? Why now? Why the hurry? Why such an opportune(istic) speech about referendae, used as a threat, a YES or NO (aren't all referandae like that anyway?) Why? Just two words:

1. Angela Merkel and David Sarkozy (now Hollande) have been threatening to impose a taxation on financial services and products, a close scrutiny and accountability of banks and bankers all over Europe. They will include the UK with an inevitability that Cameron wants to avoid at all costs. ALL COSTS! The eurozone has finally realized that their currency has been undermined by the City in London with this latter taking advantage of their membership and inside trading that their counterparts in New York cannot have. The amount of misselling of financial loans, derivatives and futures speculation by the City with false pretences, false premises, concocted assumptions, quotes and profits is beyond any concept one can imagine. Italian councils, Spanish agencies, Portuguese businesses, Greek cooperatives, Irish health groups, the ones that need financing, have been roped in financial products, packaged and legitimized by the UK watchdog. Billions of euros have been sold by City bankers into Continental Europe without any control from the ECB or eurozone governments. Merkel and Hollande finally said "Enough!!! enough David, we are not your "bitches" anymore. We want out and want to have full control on our financial services. If you are in, we need to control the City too, because you have to stop cashing in our efforts, without any counterpart!".

The United Kingdom rhetoric states that they put a lot of money into the EU. It is forgotten though, and selectivly hidden, that for the past 12 years, the UK has cashed in through the City trillions of pounds based on euro monetary speculation. That is the reason why the financial sector in the UK accounts for 25%!!! of their GDP, making the import/export balance sheet (cars, Vivienne Westwood and Union Jack flags), a mere diversion of where the real money is made. If Merkel and Hollande decide to go ahead, the cash cow will be gone forever.

The LIBOR manipulation scandal has been treated too leniently as if this is an internal UK misdeed. However the EURIBOR is rated against it on a global economy. Trillions of pounds worth of deals have been affected favouring the pound against the euro. The euro crisis has been the pound profit. With a 25% share of GDP there is not much else to sustain the country at present. The Bank of England injected 600 billion pounds of quantitative easing in the market and the pound did not move a pip (literally, FX trade jargon) such was the scale of the market manipulation. Maybe they were unaware of the deeds of Barclays or UBS but the country cashed in... BIG! The punishment is just a slap in the wrist. With things as they are Angela Merkel knows that any rescue package, any funding in euros from the ECB will end up in the United Kingdom economy through the City. This cannot be allowed.

David Cameron comes out with this "public opinion" threat for home consumption. He is now terrified and really needs a NO to shift the blame to the voters as the UK will not survive with a sudden cut of 25% of its GDP. He knows poverty is at the corner. He uses the label of public choice as a smoke screen of deception.

2. Scotland is the cherry on the top of the cake with this speech. Scotland is planning a referendum on independence next year and wants to remain/join the EU (the EU jury is still out on this technical issue). A referendum on Europe in 2015 involving the entire UK population will make a mockery of the plans Alex Salmond and the SNP have in relation of the future of their country. The debate has shifted and Mr. Salmond will look really stupid by coming now and say "Hmm! Hmm! how about our Scotland issue?" "Scotland issue?" David Cameron and the "British" people will reply in unison "How can you be so selfish when we have now a so much bigger issue in our hands? Shame on you!"

Well done David. Deception, embezzlement, deviousness and misrepresentation. All qualities that are highly coveted by...