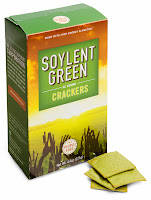 When I read the recent news about the horse meat scandal it always crops to my mind the movie I saw 40 years ago, fantastic, science fiction at the time, but as the years go by, looking more and more like reality. The movie is Soylent Green. Here's a brief synopsis taken from IMDB.

In the year 2022, the population has grown to 40 million people in New York City alone. Most housing is dilapidated and overcrowded, and the homeless fill the streets and line the fire escapes, stairways of buildings, abandoned cars, subway platforms, etc. Unemployment is at around 50%. Summers are oppressively hot and humid with temperatures over 90F during the day and night due to Earth's recent climate change resulting from the Greenhouse Effect. Food as we know, it in present times, is a rare and expensive commodity. Most of the World's population survives on processed rations produced by the massive Soylent Corporation, including Soylent Red and Soylent Yellow, which are advertised as "high-energy vegetable concentrates". The newest product is Soylent Green: small green wafers which are advertised as being produced from "high-energy plankton".

It is naïf to think that the daily mentioned retailers (Tesco, Aldi, Findus, etc.) were totally clueless about the products they were selling, all these burgers, lasagnas, bolognaises, moussakas, with processed minced meat containing 100% horse.
How is it possible none had a taste of what they were selling let alone a test? They knew the wholesale price, they knew that it would be impossible to put it on the shelves at such low price, unless something was not looking untowards. They can reel as much as they like and deflect blame towards Romanians and conspiracy theories... No, it's not only nerds that think about conspiracy theories. Corporations and politicians also ad lib on this theme frequently and conveniently.

The big retailers demand cheap food from producers to put on their shelves. The tendering process always starts from the retailer "Who can make me a burger for 2p a unit? If you can I will order 10 million!!!" It is obvious that someone will supply this at the price requested. It is also obvious that at this price the quality of meat in this product will be bad, I dare say a bit horsey, or not as described. No questions asked, no answers given. It would be interesting (and revealing) to take a peep at email correspondence in the past between Tesco, Aldi, Findus, etc and Comigel and the other suppliers that entered (and lost) this tendering process. It is also interesting how other big UK retailers that sell processed meals like Waitrose, Sainsburys or Marks & Spencer are not suffering from this problem on their food lines.

The love of the British people for horses is unquestionable. There are more horses per capita in the UK then anywhere else in Europe. But horses die. And families that cannot afford burial plots have to decide on how to dispose of the remains, or even the still frail alive being. Thousands of horses, if not tens of thousands, loved like family members, are exported for slaughter or for meat in Continental Europe for dog food allegedly. But like in Soylent Green, British people ended up eating their loved ones. Equally disturbing is the fact that this alert was not triggered in the United Kingdom by the Food Standards Agency but by their Irish counterparts. Some people might be cursing their overzealousness.

2022 is not that far away. Still 9 years to go. Any bets to what "mislabelled" food products we might find on our supermarket shelves? And if you have never seen the movie, now is the time!