"Some People" vs. Apple Inc.

We have been made aware recently of the little tiff between the Federal Bureau of Investigation  and Apple Inc.  regarding one iPhone. This one iPhone is sadly connected to the San Bernardino mass killings of last December with strong Daesh connections.


If you read the news and have a further look at the omnipresent judicial televised circus, you might think that this is a life and death battle between a self appointed defender of Freedom and Privacy and Humanity (Apple Inc. a for enormous profit organization), against a totalitarian institution that wants to have a look at everything we do at anytime (the FBI controlled by the US Government which is voted by The People on a regular basis).


You get sucked in in mesmerising words like, privacy, encryption, operating system, back door, defence, hacking, vulnerability, snoopers, terror, safety, protection, fear... fear... mostly fear. It is curious, or not, that both litigators are using fear to validate their argumentation.


But... this is not about fear or freedom or anything like that... this is only and only just about control, control of who will have the final say on what is private or not, a technocratic corporation hiding behind the blanket of Privacy, against a technocratic organization hiding behind the blanket of Security.  Curiously both claim to act in the name of Freedom, both interpreting our / their Privacy and Security in their very very own twisted ways.


To make you understand the issue better I am going to use an old fashioned biblical style parable...


Imagine that tomorrow as Tim Cook is walking around in LA, he gets shot and killed by a fame seeking "lone gunner". Another gun crime victim so common in the country... LAPD reacts and chases the gunner in yet another live TV nationwide broadcasting. Naturally the gunner, just like Syed Rizwan Farook, is shot dead as standard for the sake of expediency... which makes the unavoidable subsequent murder investigation utterly inane.

A criminal investigation ensues and they discover on his body not an iPhone no, but one Hilton hotel card key just like this one. They hurry to the hotel and receptionist to confirm the room number and get this reply:
"Do you have the PIN number linked to this key? If not I am sorry to tell sir but you cannot get in. We respect the privacy of our guests and without the PIN you are unable to enter. Moreover... if you force the entry or try the code more than 5 times the contents in the room will self destroy. That is how much we prize the privacy of our guests! And I have to add that a warrant from a judge will not make any difference to the privacy setup we have in place."


What is wrong with this hypothetical privacy stance from Hilton Hotels? Everything but mostly, albeit technologically achievable, it would have never been allowed to be put into place. 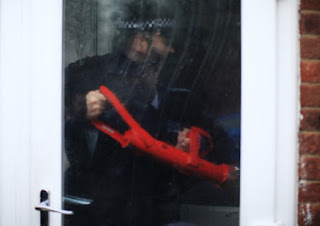 Your own homes (the epithomy of your privacy) can be raided by security forces against a police warrant (check the "key" they use in the UK on your left), your underpants scrutinized, your socks smelled, your food in your fridge, your rubbish bins, clothes, CDs, everything can be searched if deemed by law necessary to the progress of a criminal investigation... everything except your very "personal" smartphone.


The US Government fell asleep and got sucked in the hyper hype of technology advances boasted by Apple Inc. (a for profit organization, did I say it already?). They got caught mesmerised on the gadgets they familiarly looked and touched everyday for hours on end and have now arrived to a point where the point of no return is long time gone. Apple were able to develop tottaly unchallenged and dictate on their iStuff the standard of privacy they deemed "necessary".

Tashfeen Maleek phone is now locked, encrypted (or not how can the FBI know?), and with information inside inaccessible, a modern version of Pandora's box. This has now generated further pseudo — philosophical statements from Tim Cook / Apple regarding back doors, front doors, walls and other architectural vocabulary, further privacy and how safe is safe, still being allowed to express policy on a field for which they have no entitlement whatsoever. They should build stuff and sell stuff. That's it!


I will add another discussed technological advance that is now on the back pages... Remember foetus cloning and DNA manipulation? Now imagine Monsanto (or equivalent) decided a while ago to clone 10 million babies and put them in the "market" for practical purposes without any scrutiny whatosever. Then after some problems, it would be found that this was unethical and their reply would be "Oooh and it is not unethical to now kill 10 million human beings??? How awful are you US Government?"

The same happened with GM food too... However the debate started BEFORE any big steps were taken. Apple didn't. They smoke screened any opposition and hid in this sense of entitlement, of the accepted "status quo", on what I call a very dangerous nerdocracy that in their eyes replaces law, democracy, values... Sadly the US Secret Service also uses the same nerdocratic values to scrutinise their own people, which makes this debate utterly incestuous.

The Law must be restored and with some luck and wisdom someone will be the judge of it, a proper judge, which will rule for The People at last.

Addenda for the FBI


Please ignore the doors' arguments. There is always a solution and I suggest you use the Hatton Garden Principle that reads more or less like this... "If the front door is inexpugnable go for the walls". So here it is:
No thanks necessary.