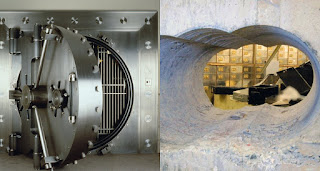 Paper is always strongest at the perforation." — Murphy's Laws

For sure the FBI read my post last week on how to access Syed Rizwan Farook unbreakable iPhone. The news published on the Associated Press today about on how they came across this process just follows a natural human time sequence since my publication. They had to go and buy phones, expenses, budget... you know the drill. 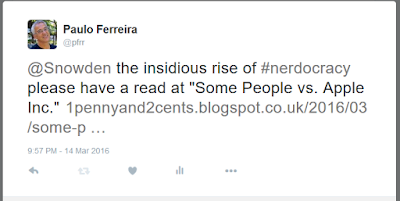 Addenda for the FBI

Please ignore the doors' arguments. There is always a solution and I suggest you use the Hatton Garden Principle that reads more or less like this... "If the front door is inexpugnable go for the walls". So here it is:
No thanks necessary.


This  works because although Apple has a lot of nerds in encryption they do not think, they are just logical as Niels Böhr used to say. Apple's encryption works locally based on the premise that the "door" is intrinsically linked to the"vault".

The "door" is the PIN when you unlock the phone (banks have those knobs you have to turn either way against a set of numbers), the so desired data are all the values inside the vault and the encryption is a connection between the door's code and the personal drawers keys customers have to access their values.

The claim of Apple is that, if you fail the door access code a few times, the entire vault will self destruct in 9, 8, 7... What they forgot is that you can clone the vault's values as many times you want. They also forgot that the local connection is what it is... local. What is encrypted when you close the "door" will be recrypted when you clone the data with another door and customer keys. They are totally independent and generated at the point of entry because, if you use quantum algorithms and encryption, they are absolute, not time dependent, instantaneous. Any data on an iPhone device, when cloned and loaded on another system should "adjust" itself to the new system if you use the same (i)OS / encryption algorithm. To make it simpler, the jewels and cash in a vault are independent of whatever combination is placed on the door and customer keys, they are also independent of whatever door or keys are being used.

"An outside party" came forward (over the weekend???) and showed the FBI a possible method to access the data on Syed Rizwan Farook's encrypted phone, according to the filing.
"Testing is required to determine whether it is a viable method that will not compromise data on Farook's iPhone," the filing said. "If the method is viable, it should eliminate the need for the assistance from Apple."

This means that the FBI has now cloned Syed's data quite a few times, as I suggested last week, and is trying to check if the instantaneous recryption works. If not, they will have to go through the painstaking avenue of using different devices as many times needed and manually find the PIN (0000-9999 usually i. e. 10,000 possible combinations). This will take  maybe another week, as they will probably need to source around 5,000 iPhone 5s, restore them to factory settings, create new Apple IDs and use them for this single purpose.

What really puzzles me is that this is not the most interesting news... The reaction from the Apple(ists) was that the FBI was playing games, they new this all the time etc. No one, no one!! is mentioning that their bull**** claiming that no iPhone can be broken into, is actually that... bull****.