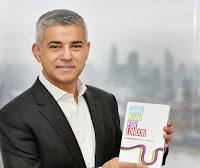 Yesterday I received an email from Sadiq Khan. I got this from the Labour email database and I am really puzzled why I got this spam from a Labour member (and via the Labour party!!!!) to endorse the candidacy of Owen Smith. In this process Sadiq's opinion is as valuable as mine regarding the outcome of the now active Labour leadership process. To my knowledge I was not invited to spam the now half million Labour members, telling them who I think will be best to lead the party. So, once again, shame on whoever allowed this to be sent using the Labour party channels.

I was deeply humbled to be elected as the Mayor of London in May, thanks to the hard work of Labour members and supporters.
I've played no part in the turmoil this summer and I've thought hard about my role in the leadership election. I've been asked how I'll vote by many of the members and supporters who helped me, and you deserve an answer.
So I want to tell you why I'm backing Owen Smith to be the next leader of the Labour Party.
Owen has the strongest Labour values - he led and won our fight against the Tory cuts to tax credits and disability allowances. The polls show he is the most likely Labour candidate to win the next election.

I am dumbfounded by the fact that Sadiq "played no part in the turmoil"... a poor choice of words and an even poorer choice of action. The lamest excuse for propaganda that "I deserve an answer" based on Mr. Smith's sycophantry (of which he makes part), was used in a shameless way.

How on earth can Sadiq make the statement that "Owen has the strongest" Labour values?? Based on what? Against what? Sadly he doesn't and neither has Sadiq. And then the polls... Sadiq goes for Owen on "polls" that show the "likeliness" of Owen winning the 2020??? election. The values of both are contemptible to say the least.


Your choice is a poor one. Remember you were elected Mayor of London on Jeremy’s bandwagon Labour resurgence. You had 3 choices:


You did none of the above which in a way shows how an inadequate, amateurish politician you are (or became)
Labour will survive regardless... I don’t know about you... Comrade