Skip to main content
Posted by Paulo Ferreira Wednesday, May 10, 2017

I debated the title of this post between losers and amateurs... amateurs had to win.

Yesterday I went to Event City to attend the launch of the Labour campaign. As a Labour member, I received a few emails inviting me for this celebration and curiosity won. I had to have a look. 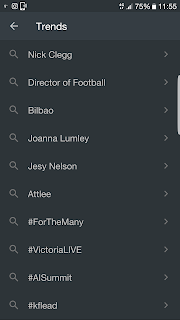 I did not know what to expect. I've seen a lot of politics and good launches and good and bad parties and good and bad professionals. I was not expecting this. I arrived at 10.45am for a 11am launch. The venue was half full. I tried to find the hashtag on twitter for this... none to be seen, at all. It transpired later, that the hashtag for The Big Launch was #ForTheMany. By the end of it it was crawling miserably below 30th and behind... Nick Clegg, of all people. I had a look at the banners, the words, the speeches, everything falling utterly short.

The original caller, introducing the event, had a voice so enthusiastic that would have made Eeyore jealous. Finally Jeremy Corbyn came on stage. And talked... the same stuff all over again. The For the Many... not the Few. The rich and the poor... the NHS. My disappointment was indescribable.

I do no understand... why For the Many? Why not for All? Why alienate the Few? The ones that actually have the money and contacts and power to embark in a project if it is worthwhile? And the clichés on the banners hanging all over the venue? They could all have been written by the despicable Ian Duncan Smith. 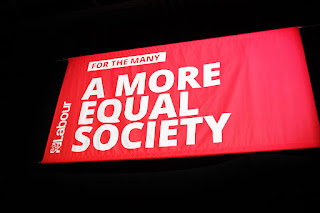 A More Equal Society... Why more? What's wrong with An Equal Society? Why grading Equality? This is stolen from George Orwell's Animal Farm for sure and has been sorted since 1789, if I can remember, with a so much better Liberté, Egalité, Fraternité. But there were more, like "Dignity in Old Age" as if the young are not worth of it, "Creating Good??? Jobs", "Public Ownership of Rail" (why Rail only?), and the good old "Fully Funded NHS".

Jeremy mentioned the news published on the last Sunday Times of the 1000 Richest in Britain. He proclaimed the affront this was to the million people that are using food banks all over the country. He even joked about it, saying that Rupert Murdoch has made Labour a big favour with this publication. He mentioned the 14% of wealth increase and how the world would have come down if all the workers on the good? jobs had asked for an equivalent pay rise. And then he said... the wealth of these people would be enough to maintain the NHS for 6 years!!!!

FFS Jeremy... are you telling me that if we muster the entire wealth of the 1000 richest people in Britain, The Few ones that The Many envy, sipping champagne in their manors, on yachts, gently swayed by the warm Mediterranean Sea ripples, all we can have is 6 years of NHS?? And what happens afterwards? We will have the Duke and Duchess of Cambridge plus Richard Branson and Phil Collins adding to the million plus queue in Food Banks for a tin of beans? And wow Bill Gates gigantic fortune is equal to 10 months!!! of NHS. Beans for him too afterwards. It is not numbers that do not add up only, it is the lameness of arguments, the amateurism... because you are missing the point, the other amateurs around you are missing the point too.

You cannot win an election based on numbers, on jokes, on punditry, on bitchiness. You have to understand that 80% of the residents of this country are living pretty well. If your target is having the million votes of the food bank users you have to do better than alienating everybody else... because Theresa May has already grabbed the Just About Managing, which is a joke in itself. The "Just" About Managing are people that have a house, a car, children, full fridge, school, shoes, clothes, jobs, a fortnight holiday in Cyprus on lilos, gently swayed by the warm Mediterranean Sea ripples. And that is being sold to us all as a matter of horror. You have to remember that, Just About Managing is a mother holding tight to her one year old son, hanging for dear life with another hundred JAMs, on a rubber dinghy, gently swayed by the warm Mediterranean Sea ripples. And all because she had a dream she thought it was worth having a vote for. I have to remind you that 10 years ago she also had a house, a car, a full fridge, a job and Assad as president. Is this the same difference?

You will not win this election on 1% Income Tax reduction or by scrapping tuition fees. People need more. People need to hear the words "I have a dream!". Your cult of personality is not enough. Your well kempt unkempt beard, your well curated ragged wardrobe is utterly dishonest. Because you have no dreams. You have nothing to give to people.

To finish, I will tell you a story. It's the story of a people, exploited by a foreign political elite. One day, one of theirs, destined to become part of that elite, rebelled and said "I have a dream. We can live a life of freedom, in our land, where milk and honey will flow. Who's coming with me?" Remember the bloke? A guy called Moses? Everybody followed, The Many and The Few, the rich and the poor.

Apparently the people in this country want to get rid of the Pharaohs. They need a dream now. Do you have one? Because if you don't, this is going to be a hell of a nightmare.