The Biggest Nail House on the Web 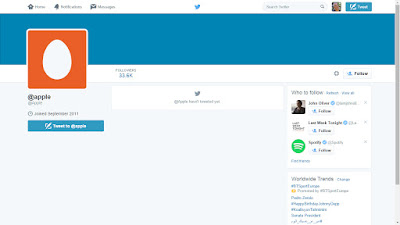 While surfing the web this morning I came across this little gem of Twitter account @apple. Surprisingly this account has not published a single tweet yet. Not one, nothing, zilch, nada!!! It is at present in the "freezer" waiting for better days. It has however 33.5K very very distracted followers

So... what's going on? What's happening?

The John Doe that opened this account was probably shocked to see that as late as September 2011 he was able to grab the name @apple on Twitter. When Apple noticed this, it was too late. Too late in or after September 2011! Not 2007! Now Apple, the biggest company in the world, missed the train big time as, for all practical purposes, it is not on Twitter!!!!

@apple / John Doe, as I mentioned above, has not posted a single tweet... Apple most probably tried to buy out the name from John and was then shown a bill for $100,000,000.00 (late arrival penalty) or more. The silence of this @apple account (not verified account by the way) shows that Apple Inc. (NASDAQ:AAPL worth $727 billion!) was not willing to pay, and as a consequence, surely a court injunction was filed to impede John to publish anything on that Twitter account. 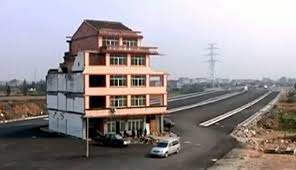 This is for sure the biggest Nail House we have on cyberspace at present, and as all Nail Houses are, this one is incredibly funny.